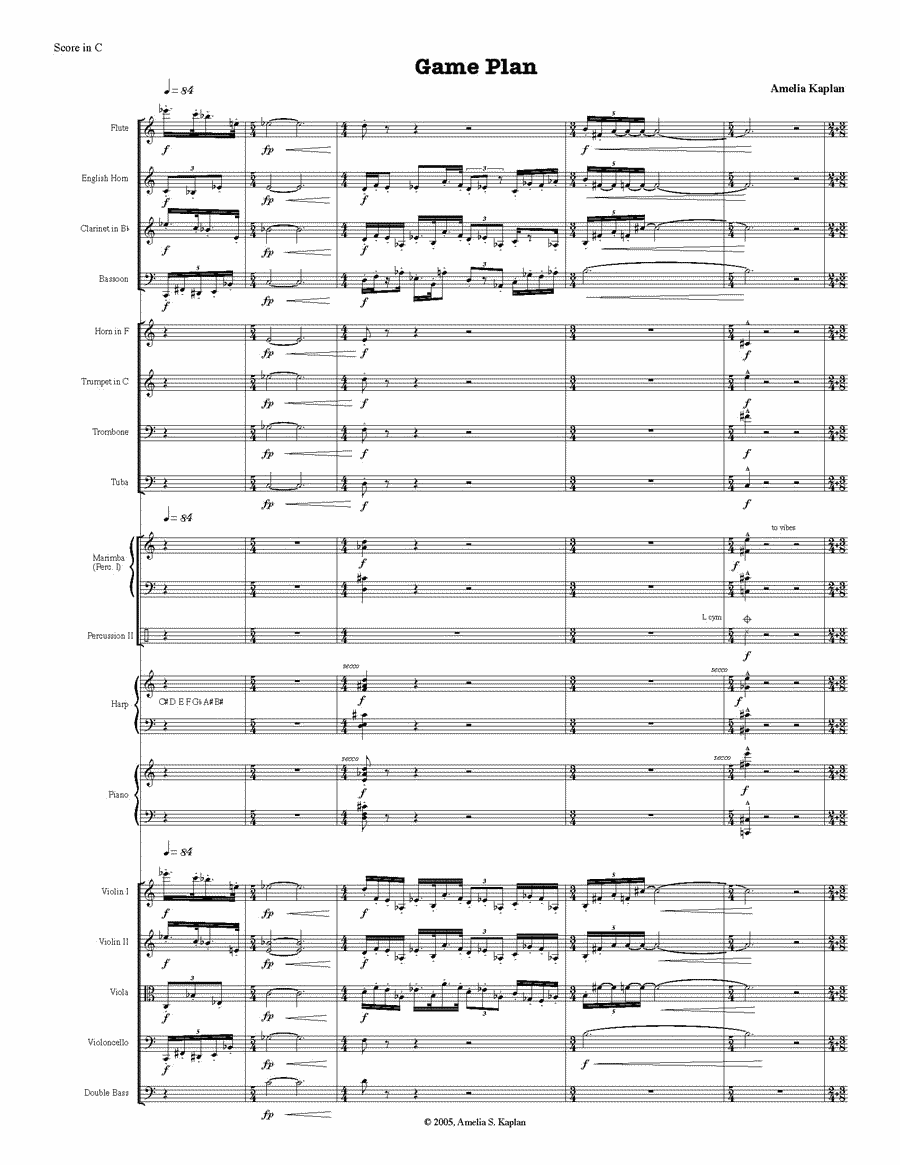 NOTES: One night in June of 2004, as I was drifting of to sleep, I had a sonic “vision” of many instruments playing a specific descending figure, in different tempi, in a continuous cascade over an ostinato, resulting in a thick sound mass. This chunk of music occurs about three fourths through Game Plan – the rest of the piece was composed forwards and backwards from that segment. Although I did not set out to write a funny piece, the materials themselves, fairly banal and comical in isolation, inevitably led me to do so. The idea of juxtaposing musical figures in different speeds is presented at the very beginning and then continues in a unison line in which each beat is divided into a different number of subbeats (essentially different speeds) which leads eventually to entire bars and even longer spans proceeding at different tempi. The motive, which takes turns as a tune and as an accompaniment, turns into an ostinato which repeats ad naseaum. (A simple object can turn into something very different simply by repeating, in essence focusing a lens on its makeup – think of Satie, for example.) The ostinato then culminates in the parent tune piling up on itself, i.e. in the musical vision which precipitated the piece in the first place. Tim Weiss suggested that my original segment sounded like “a game,” thus giving me the idea for the title. Indeed the piece is about playing with time. The result is my “Game Plan.”

Scores for Game Plan are available from the composer.

Game Plan 2 is an alternate version of Game Plan with no tuba or harp. Game Plan 2 was premiered at the Composers Conference in Wellesley, MA, on August 5, 2005. See Game Plan for notes. 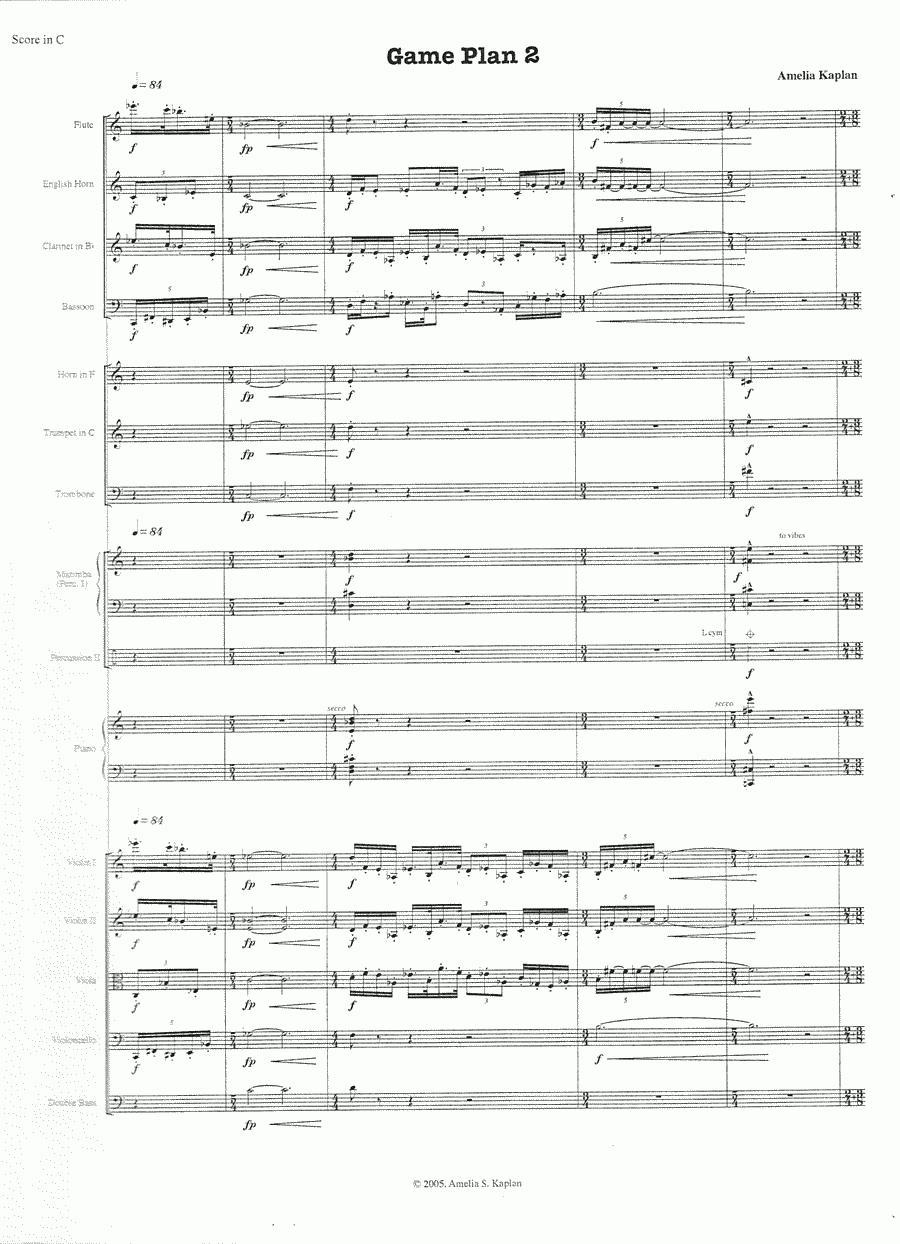 Scores for Game Plan 2 are available from the composer.

Grates and Grills
(for double guitar orchestra or guitar octet, 5') 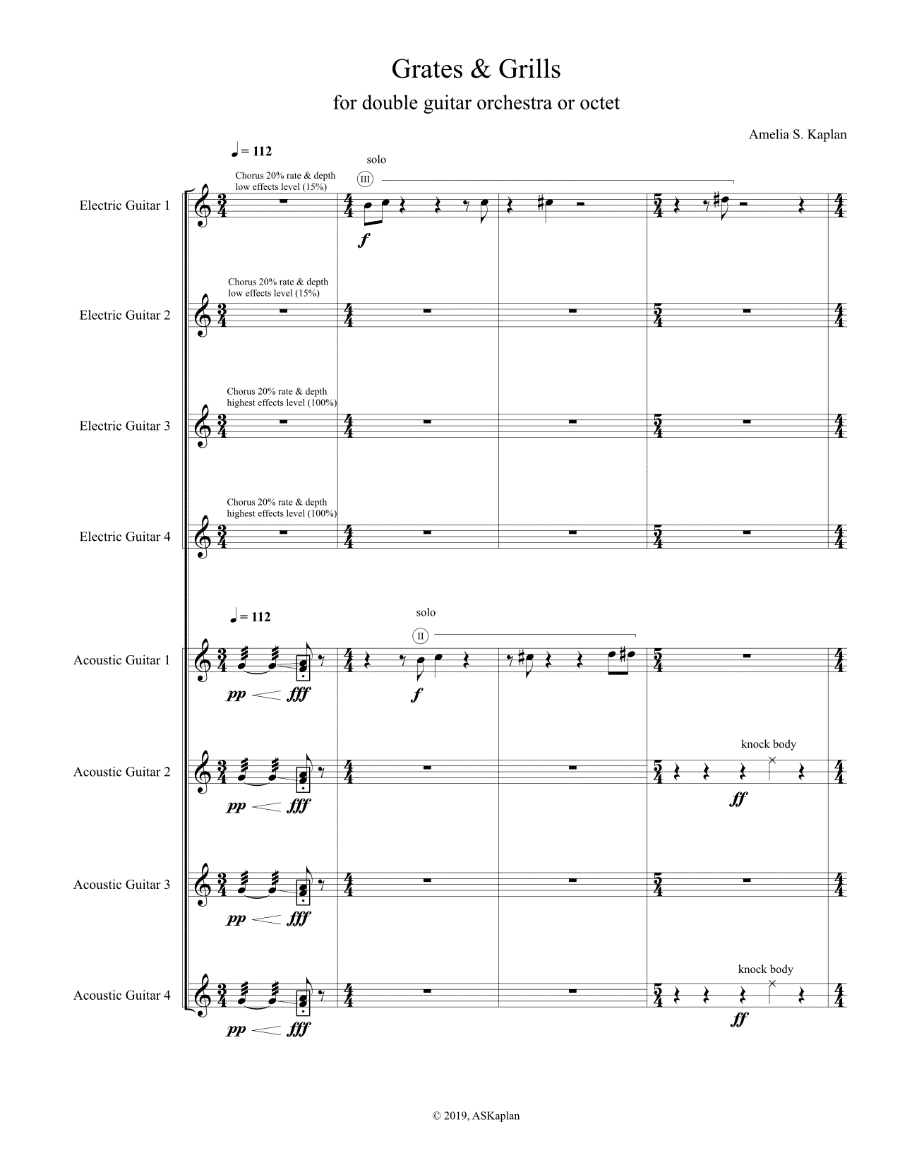 NOTES: Grates and Grills, exploits the different sound worlds that the two groups of guitars occupy. This difference is first explored by having the first chair players of each group play duets, offset rhythmically and by using quarter-tone tunings in a somewhat canonic fashion. One plays a short passage, and the other repeats it offset by a quarter tone. The two guitar groups also take on different tasks, one playing attacks while the other sustains. The acoustic guitars often morph from pitched material to noise material, in an analog to the way electric guitars can use distortion to change pitch to noise. The acoustic instruments are also often used to sustain pitches through tremolos, even though sustain is more a natural feature of electric guitars. At other times the two groups combine to create a new sound through their shared material.

Scores for Grates and Grills are available from the composer.

Permian Divide: the mother of all extinctions
(for high school/college level symphony band, 5')

Version B was written for Caroline Hand and the Ball State University Symphony Band. Premiere (April 25) cancelled due to COVID-19 and rescheduled for Fall, 2020. 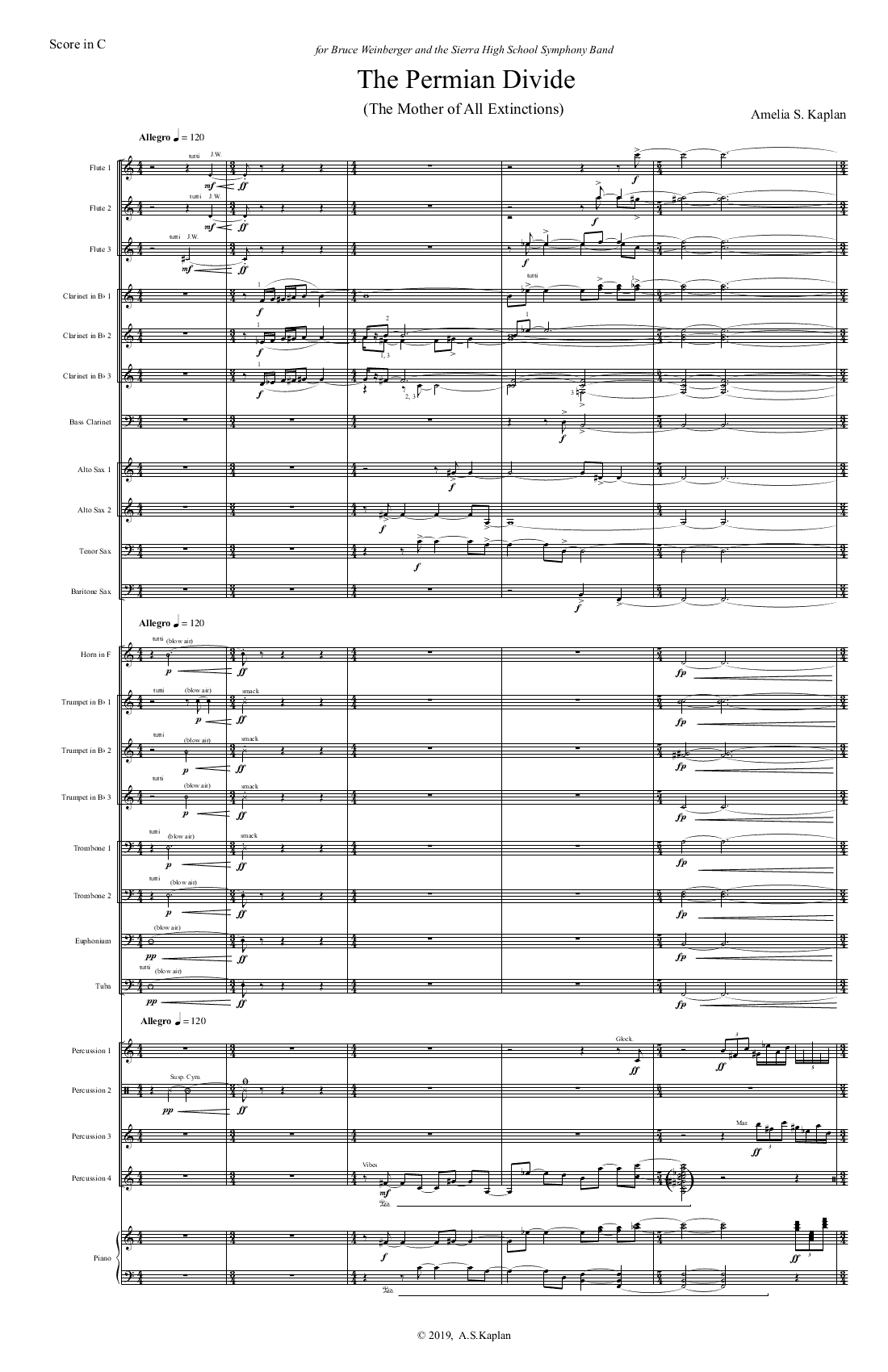 NOTES: The Permian extinction took place about 250 million years ago and divides the Paleozoic and Mesozoic periods. The history of life on our planet is punctuated with five notable dips in the number of species, known as extinction events and defined as a sudden and massive loss of life on a global scale (we are currently in a sixth extinction, likely caused by humans). These extinction events usually took place over tens of thousands of years, but from the perspective of 550 million years, the duration of life on our planet so far, 1000 years is the blink of an eye. The Permian extinction was the largest extinction event: over 90% of all species died out. Ferns, conifers, therapsids (which evolved into mammals), and archeosaurs (which evolved into dinosaurs), were some of the few species to survive. Although the reason for the great die out, referred to by some as the “mother of all extinctions,” is not known with 100% certainty, it is hypothesized that it was due to a massive dumping of carbon into the atmosphere along with massive climate change. This work was inspired by that event.

Scores for Permian Divide are available from the composer.

Rituals and Revelations
(for 8 voices and chamber orchestra, 30') 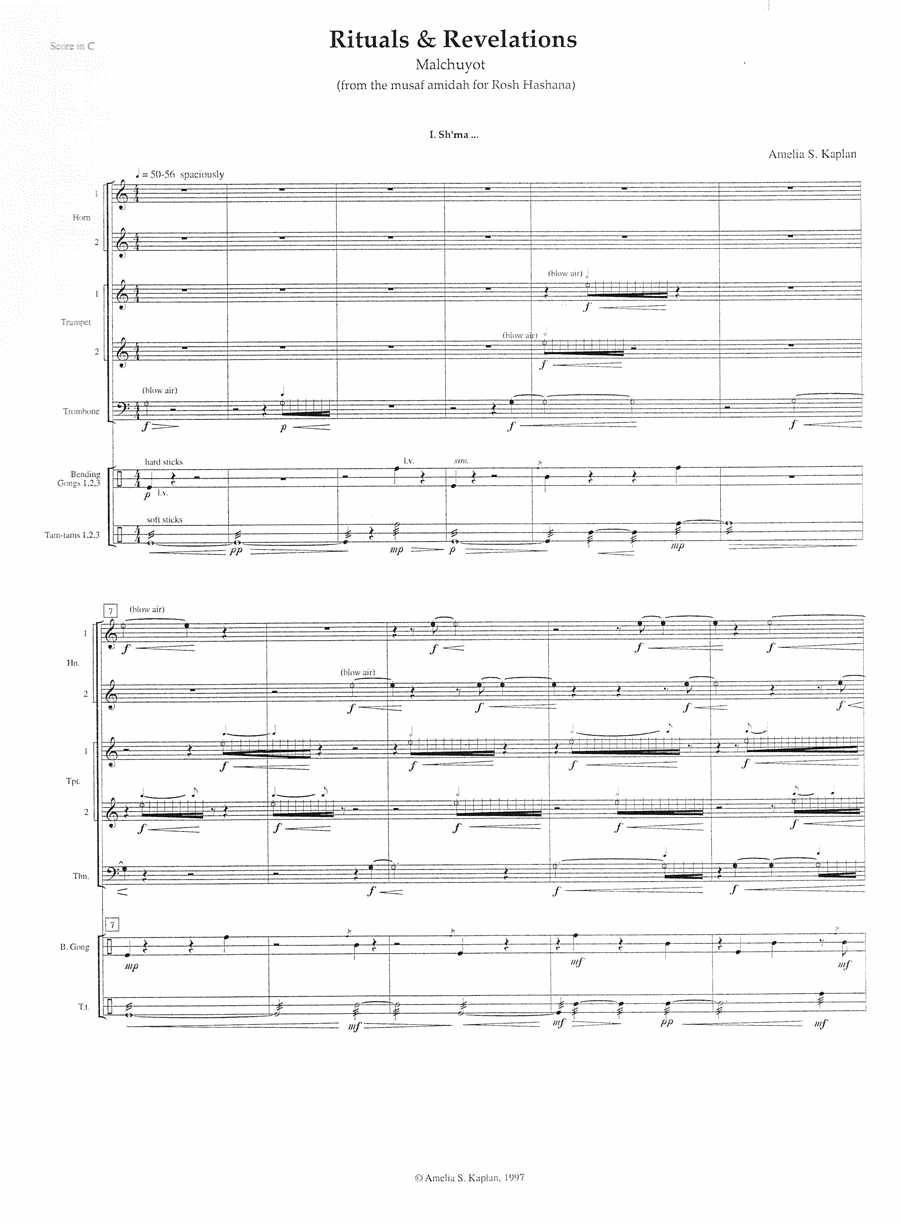 NOTES: Rituals and Revelations: During Rosh Hashana (Jewish New Year) of 1993, the late Rabbi Daniel Leifer of the University of Chicago Hillel Foundation announced that if any Jewish composer would be willing to create a musical setting of a particular portion of the New Year liturgy, he would make sure that it was performed. I decided to take him up on the challenge. The result of this project is a "cantata cycle" consisting of three separate cantatas and a coda -- tonight just the first cantata will be performed. The set of verses, Malchuyot, or kingship, is from the musaf (additional) amidah (standing prayer), and is one of the three “holiday specific” portions of the liturgy for the Jewish New Year celebration of Rosh Hashana.

These ten verses are taken from the Pentateuch, the Prophets, and the Psalms. My musical settings are based on the voices speaking the texts: God and Moses, the prophets Isaiah, Obadiah and Zechariah, people (Psalms) and several have the perspective of a modern day narrator recounting an historic event. Verses spoken by God or Moses employ only the syllables and vowels and are thus unintelligible. I reordered the words in the verses spoken by the Prophets to create new phrases which are intelligible, but which obscure the original meaning of the texts. Psalms, representing voices of people, are set in a straightforward manner, and those verses representing a modern day vantage point are spoken.

Hebrew is a language in which gender neutral pronouns and verb conjugations do not exist, so in order to create a more gender neutral work I use both masculine and feminine versions of all the verses. The harmonic material for the prophets was derived from the letters of their names, and the base chord for the 4-part and 8-part choral setions are derived from the gematria of the entire set of verses -- that is, I added up all of the letters (both masculine and feminine versions combined) of each verse and got one pitch. The two paslm verse choral sections use Yemenite drum patterns.

Scores for Rituals and Revelations are available from the composer.